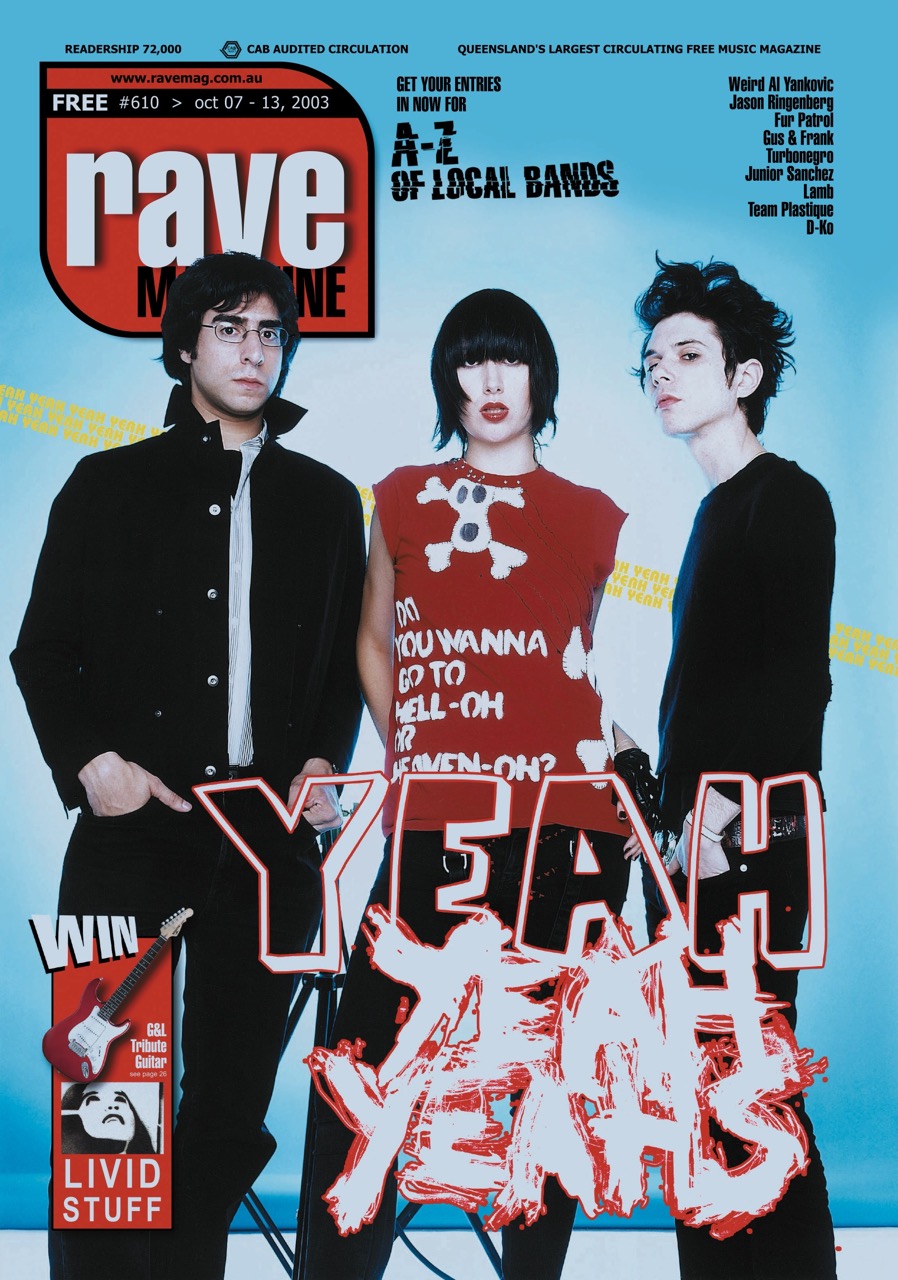 Yeah Yeah Yeahs’ too cool guitarist Nick Zinner, is someone you could quite easily imagine hanging out in the dark corners of a smoke-filler New York basement, cigarette dangling limply from his mouth, attired in fashion that says more about him than an interview ever could and having blasé discussions about Andy Warhol and the New Yorker Avant-Garde-ism.

Since their fast-tracked explosion into the music scene, Yeah Yeah Yeahs’ unique brand of art-punk-rock has been heaped into the celebrated and super-hyped category of garage-rock resurgence populated by the likes of The Whites Stripes, The Strokes (both of which Yeah Yeah Yeahs supported on tour) The Kills, and B.R.M.C. Given their instant success and bathing in the shinning attention and adulation of the UK press, and subsequent US press, you could quite easily imagine Nick being quite elitist and reserved. Surprisingly, he’s happy to have a chat from his New York apartment on his first week off from touring and since his computer has just died in the other room…

“I’m trying to figure out why it won’t turn on,” Nick says. “It turned on for a while and now it’s fucking blown up.”

I quickly cut to the chase, raising more important issues, namely whether there can in fact be a ‘the’ in front of Yeah Yeah Yeahs.

“There can be, it’s optional. If it rolls off the tongue better, then by all means use it. I mean we prefer no ‘the’ but sometimes when you’re speaking it just comes out with a ‘the’ before it.”

Thank God that’s been cleared up. As the sole guitarist, Nick makes up one-third of the bass-less band, while Brian Chase takes care of drumming and Karen O screams, wails and moans her sexually charged vocals. I asked Nick when on stage as the lone guitarist if he feels any extra pressure being as the backbone of the music?

“Nah, not really… It’s good; it’s kind of a challenge. I just have to stay clear of Karen. She keeps me on my toes. Sometimes she sort of like runs over to me and like jumps on my guitar cord and it comes out and all the sound goes out (laughs). Then you panic because everyone notices that it’s just the one little guy doing all that noise.”

So Karen could be described as completely crazy on stage?

Are there any Karen O horror stories from the stage?

“Not really, I mean, she hurts herself a lot (laughs). It’s more for her; the next day after some shows she’s just covered in bruises and her body is like a coffin. She gets hurt a lot up there, but nothing really bad has happened, except in England, like Karen was swinging the mic and the mic came off the cord and hit some kid in the nose. But the kid was actually really psyched, like he had this big fucking scar on his nose but he was such a huge Yeah Yeah Yeahs fan that, we all just hung out afterwards”

(At the time of the interview) the new single, Maps, recently knocked The White Stripes off the top of the NME charts. Did you expect anything like that?

“Not at all, (laughs) not at all. I mean, like we know it’s a really powerful song, it was sort of like… our rationale behind signing to a major in some areas was like ‘we might fail, we might win, but at least we’ve got Maps.’ That was sort of the thing we all fell back on because like, it’s the song that we’re most proud of.”

The song seems quite different to any of the songs on the album, how does it feel to have that success with that song, being so different to the rest of your album?

“I don’t think it’s like radically different. Do you remember like ten years ago there was like this terrible metal band from Boston called Extreme? And they had that More Than Words song?

“Oh, it’s like this dreary, cheesy sort of really petty ballad, like the singer and the guitar player and it was basically a love song and you know the rest of their music was this horrendous pop metal. You know, they broke up a year after because all these people bought their record and they were like, wait a minute, this song that maybe some people love was actually done by this terrible, terrible band. You know, it was such an extreme to what they were doing. But we felt comfortable with that the rest of the record was sort of varied enough, and each song was different enough to not really have to worry about having that stand out as more heartbreaking than others.”

How did you feel about all the UK press hyping you and the album up so much?

“It’s pretty unnerving. I mean some of it’s really cool because it gets a lot of people excited about hearing us and it allows people to find out about what we’re doing, but at the same time, they’re so sensational over there about us and about music in general. They’re not really writing about the music, there’ just writing about…”

How important is image to a band?

“Um, I think it’s important, but when you listen to any band on headphones, image isn’t really an issue. It’s definitely a key to performance, especially Karen and some of the outfits that she wears. You know it’s really entertaining but good music and good art needs to be more than one level deep.”

You’ll be playing the Livid Festival when you’re over here, how does playing a festival gig weigh up against playing a club gig?

“Um, they’re so different, like for one I guess the most important thing is that when you’re playing a club show, almost everyone there is there to see us, because we’re the headliner. At festival it’s like… we just played a festival on the same stage as like Good Charlotte (laughs). It’s just like weird bands that we would not really be caught dead in the street with. So it’s their fans and it becomes much more challenging to win the crowd over.”

So you wouldn’t be caught dead near Good Charlotte?

“No (laughs). I do have to say that they were really, really nice guys, so it was really hard to be mean to them. They were just so nice. Even though I hate their music, they were so polite.”